Before I delve into details, let's stop for a second and try to build correct associations - between word "model" and our imagination. Model, to me, is something that demonstrates the purpose of the product, whatever that is. It's nothing difficult, just that.

Please don't confuse model with prototype, as prototype is something functional that demonstrates a working concept; prototype is a simplistic implementation of a product for the purpose of PoC (Proof of Concept). Model, on the other hand, can serve as a full-fledged basis for the completely functional product.

First characteristic of a properly built model is being natural. I can't stress enough the importance of this part.

Many software architects think of a model as something way too complicated, as if they were proving their intellectual dominance to the organizations they are working for. In my opinion, those architects are missing the point.

To build a model, you don't need special knowledge other than what you are trying to build and to model. Nouns in the organization's domain build up the entities (classes) of the software model naturally. Verbs in the problem domain define entity's operations (methods) and relationships between them (dependencies, references, cross-type calls, and event listeners).

Second characteristic of a properly built model is being platform independent.

Frustratingly many software architects cannot define clear boundaries between platform independent and platform specific parts of the model. Eventually, they end up building platform specific implementations of their initial ideas (or the ideas were platform specific from the beginning - which is worse). In the early days of the product development they refer to this as a very nature of the product they build, and they underscore the needless efforts to support platform independence. Whenever platform specific implementation needs to be replaced, they call it a technical debt and dedicate another century to rebuild things a little bit. So, I don't think the final product they are building I would call a quality software - it simply does not pass the criteria.

Third characteristic of a properly built model is being unit-testable.

Unfortunately, many people started thinking about unit-testing as something easily achievable by using shims. And, also unfortunately, there are plenty of shim frameworks out there that promote tight coupling with the platform specific code. I would not call a code unit-testable if the only way to test it is to create shims.

For clarity, by "shims" I mean platform specific mocks that on-the-fly replace the functionality of the platform or particular technology that your code refers to. For example, if your code uses SharePoint object model, shims would be used to mock out the SharePoint framework to act as if it was a mock, not a real SharePoint implementation.

Main reason that I discourage unit-testing using shims is because you will start creating more platform specific code instead of clear, platform independent models. And later on, you will face the challenges of refactoring, which I mentioned above.

To demonstrate the parts that I already covered above, let's consider an example of a chat room that I want to build (diagram is provided below).

Next, for the sake of being platform independent, I'm not even thinking about the implementation yet. Let's say that the customer is not sure yet, it can be either a windows application, or a web application. But for now, we don't know and so we don't care.

Finally, for the sake of being unit-testable, I kept Participant abstract along with its ReceiveMessage operation. So, by substituting mocks of Participant into the ChatRoom, I can see if it manages all the participants properly (delivers messages to the correct recipients). 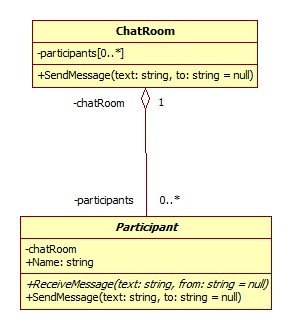 Now, let's talk about the platform specific part of the topic.

First of all, platform or technology is just an implementation detail, so never worry about it earlier than it's required. As I mentioned above, your goal should be to fit technologies into the model, not the opposite.

I've seen many architects blindly following technology and platform, by promoting very specific ways of modeling that fits only one particular platform or technology. Those architects, to me, are developers who have mastered the technology and cannot think out of the [technology's] box.

Now, about our chatting software - the customer finally decided that both web and windows clients need to be supported. The ChatRoom instance must be kept alive on the server as an executable (service or running process).

As you would imagine and I would expect, I'm not going to change my model anyhow. I am going to figure out how to fit all these requirements into the implementation (platform specific) part of my software.

So, here is what I'm proposing to the customer (diagram comes below):

Very similar approach is used for implementing web-based client. The only difference is that there is no two-way communication available between the service and the web client, so the database is introduced as an intermediary transport mechanism for exchanging messages. Web client is a single web application that serves all clients.

On the service-side we have one more (final) instance of the ChatRoom class that holds service-side implementations of the Participant - WinParticipantHost and WebParticipantHost. This is needed to support the differences in message exchange approaches for windows and web clients. 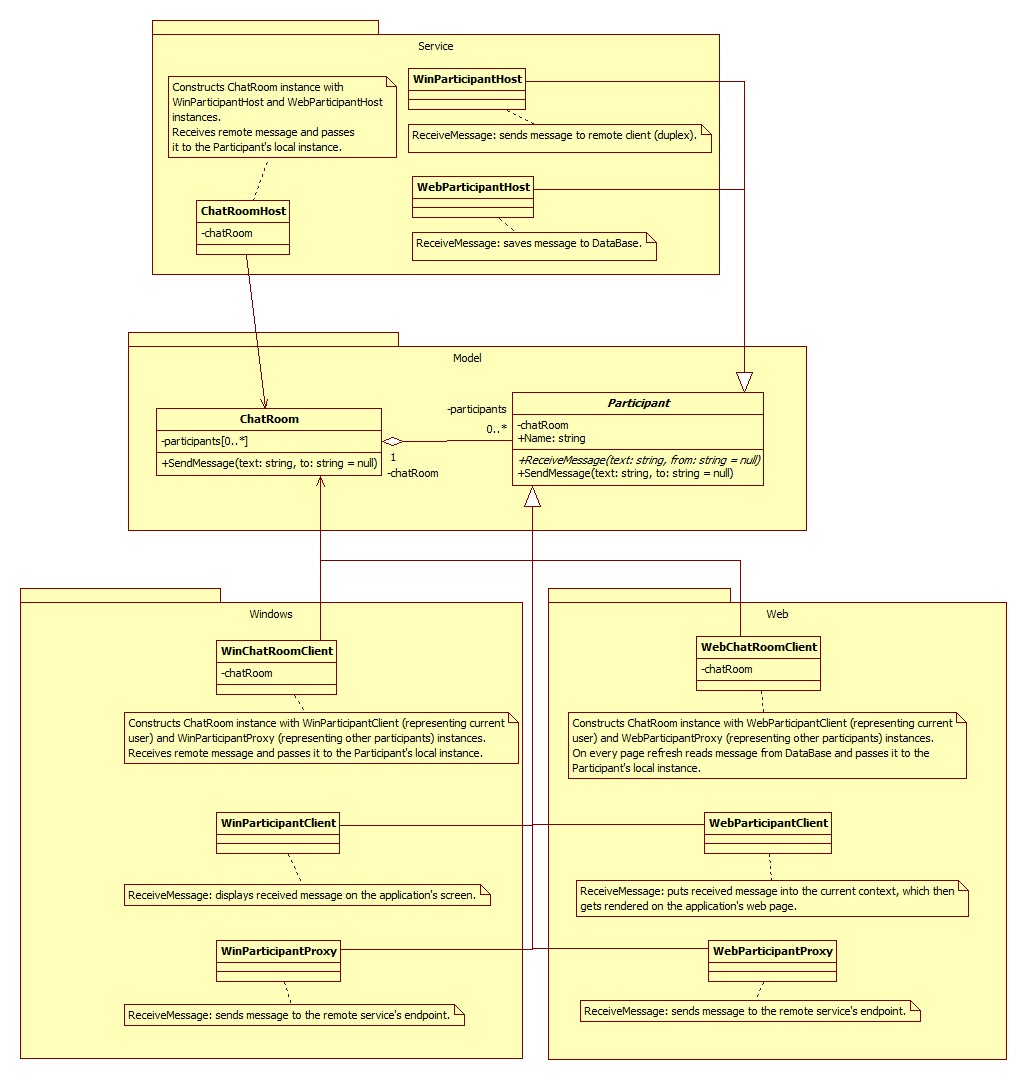 Here are proofs of concept for my approach:

So, to sum up the above story: modeling, as it is described here, is the right way of architecting software.

Want to see and master more real life, practical software architecture like the above chat example? I provide training courses around this topic.

The author of the above content is Tengiz Tutisani.

If you agree with the provided thoughts and want to learn more, here are a couple of suggestions:


Ready to take the next step?